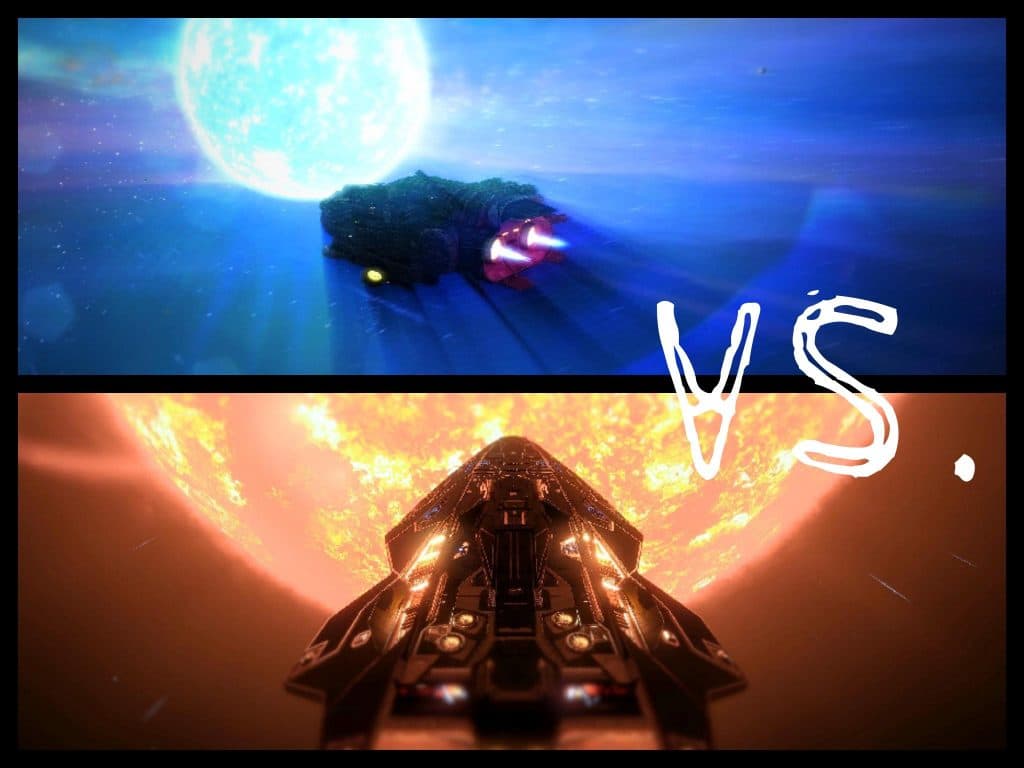 I admit that Rebel Galaxy took me by surprise. Be it not for the recent Steam sale, I wouldn’t even have heard about it. It’s good. So good that I’ve decided to put it up against Elite: Dangerous in a three-round match over what matters in space sims.

It is an all-too-well-known fact that in space, no-one can hear you scream. It is, to the fullest extent, true of all open-world space sims and I wouldn’t wish it to ever be otherwise. You don’t get to own the universe. You only get to exploit it for (ill-gotten) gains. How do you usually go about that? You make friends. But you’ll earn enemies in the process.

Whilst Rebel Galaxy sticks to this age-old formula with immediately apparent consequences, Elite: Dangerous doesn’t. But not in a way you may expect. Are you a merc for the Federal Navy? Well go right ahead and buddy-up with the opposition (Empire), nothing’s stopping you, there literally are no strings attached, none whatsoever. Are you working to boost your chosen faction’s influence over the system you call home? Well good luck with the barely-moving progress bars, especially when other players are working towards the opposite (something you won’t ever be able to find out)! Has war broken out? Well all the best finding it because in Elite: Dangerous, wars only take place in stationary controlled bubbles that leave the rest of the system completely unaffected!

No, in space no-one can hear you scream. And no-one should. But the irrelevant piece of shit you’ll inevitably feel like in Elite: Dangerous‘ universe that does whatever the fuck it pleases, thus ultimately coming out as sterile, meaningless and clinical is just a bit too much to digest.

First things first. I am not exactly a fan of the ship variety in either Rebel Galaxy or Elite: Dangerous, and I don’t mean model variety. With the latter being more than abundant in both games, it comes as almost a surprise that each ship does exactly the same thing as the last, only with varying quantity or scale.

That said, Rebel Galaxy, while being slightly more bonkers with the exterior designs, doesn’t stand a chance when the ships’ true characters are discussed.

I don’t by any means dislike what I got to fly in Rebel Galaxy and I have very much enjoyed finding and capitalising on its ships’ individual strengths. Say the hyper fast Barracuda or the completely insane broadside firepower of the Blackgate. On the other hand, Elite: Dangerous‘ shipyards have lore, history, pedigree. They are not unlike real-world cars, and the super-immersive in-cockpit view (that Rebel Galaxy lacks altogether) delivers the decisive blow.

Let’s not lie to ourselves, combat is always the cherry on top of the cake that are space sims. Every now and then, there’s one that omits one or more of the usual ‘professions’ – trading, mining, exploration (all of which are there in both Rebel Galaxy and Elite: Dangerous) – but never one that omits combat.

I won’t beat around the bush. Rebel Galaxy‘s combat is quick, explosive, varied, colourful, and, despite being stuck on a 2D plane, suprisingly tactical. No, I’m not saying ground-breakingly tactical, just surprisingly. Shields and hull are divided into port, starboard, bow, and stern. The ship’s AI actually calls them that too, which I think is bloody awesome. It makes one really consider poisitioning. Each turret has a set of target priority options (e.g. ‘fighters only’), which only deepens the tactical aspect and heavily contributes to satisfaction over a hard-won battle.

Combat in Elite: Dangerous is more of a reactive – rather than proactive – business where you divert power, deploy countermeasures, or fire on all cylinders as or when dictated by circumstance. Although the game tries really hard and most of the time succeeds audio-visually, it all boils down to reflexes, DPS, tanking, and, well, nothing much else. The devs’ perpetual tinkering with AI behaviour or recent addition of buffs / debuffs / status effects which nobody knows what they mean or how are they countered isn’t helping things.

The two men at Double Damage, co-founders of Runic, have set out on a journey to create “smaller, quicker games”. And therein lies the true poetry of Rebel Galaxy. Dwarfed by Frontier’s multi-million dollar, megalomaniac (and completely unnecessary) construct of 400 billion star systems, it’s indeed a snappy, clever, fun little fellow, a welcome fix for those who love space sims but don’t really look for a master’s degree in them.

But wait. There’s still an elephant in the room that I feel needs addressing. It’s of course the simple status-quo that Elite: Dangerous is a 10-year work-in-progress project. To which I have this to say. So what? It has been released to general public, for a full retail price, in December 2014. It’s not in Early Access on Steam, neither is it made indubitably clear in its sales-pitchy description. Frontier deem it a product worthy of sale at full price, I therefore deem it a product that is right here, right now, complete. Should this ever change, I’ll be back. Comments section is where it usually is.

Make A Game (Not) A Good One Episode 4: Procedural Generation

The WeekEndGame: Not Alone, Just Lonely