As far as the rest of simulated vehicles – anywhere, ever – is concerned? None better exist, full stop. To fly it truly is a privilege.

A beautiful Friday morning. Smell of coffee. Yes. The time seems just perfect. Grabbing a mouse, the all-familiar WASD key layout and march into battle with them sort of video-gamey nonsense would feel about as appropriate as starting a holiday in Corsica with a pint of Foster’s. As the steaming mug lands on the coaster, a map pops up on screen.

Two airports, a couple of VORs and NDBs each, fair flats of Germany to the north, majestic Austrian Alps to the south, landscape waking up from winter underneath. No drama… well, let’s first see about the above part.

See the cloud coverage? See the wind – 14 knots roughly west – just above our intended altitude (5,000 feet)? Yeah. The stars are aligned just right this morning, told ya. I’ll be eagerly awaiting Linz’s ATIS en-route, but expect no surprises. Seeing no need and slight logistical difficulty in setting an alternative aitport, I have noted down the destination’s ILS frequency and heading, just in case.

It’s shortly before half past eight on this beautiful early-spring morning. It is time to go meet the beloved G-KELS.

Having, sadly, not flown the little Cherokee for some time, I am slightly concerned about a thing or two. The battery may be dead. Water may have condensed on top of the fuel tanks and contaminated the precious liquid. And yes, this is all actually simulated! A more-thorough-than-usual pre-flight is in order.

Wow. Speak of no surprises, the fact that the plane is, as far as I can tell, in superb condition is the first one of the day. I won’t even bother taking it to ‘the workshop’, let’s just fire it up… and into life she spurs with ease and grace. Beautiful.

Of all the little, seemingly meaningless touches A2A put into their tour de force, I think I love this one the most; the delay between clicking the avionics switch and the instruments actually lighting up. As they do in disorderly but organic fashion, I whip up the kneeboard, jumping straight to the nav log.

Well, as one can clearly see, some of the knobs around the cockpit are way too old and got the NDB frequency wrong. I am of course referring to the old knob in the pilot seat. Never mind, ADF, in strong presence of VOR, is just a backup anyway.

Salzburg tower, probably over enthused about this pleasant day, have slightly forgotten about this big boy when or after giving me the taxi clearance. Well. Guess I’ll just be keeping off those jets’ rear end whilst I boogie towards runway 16. 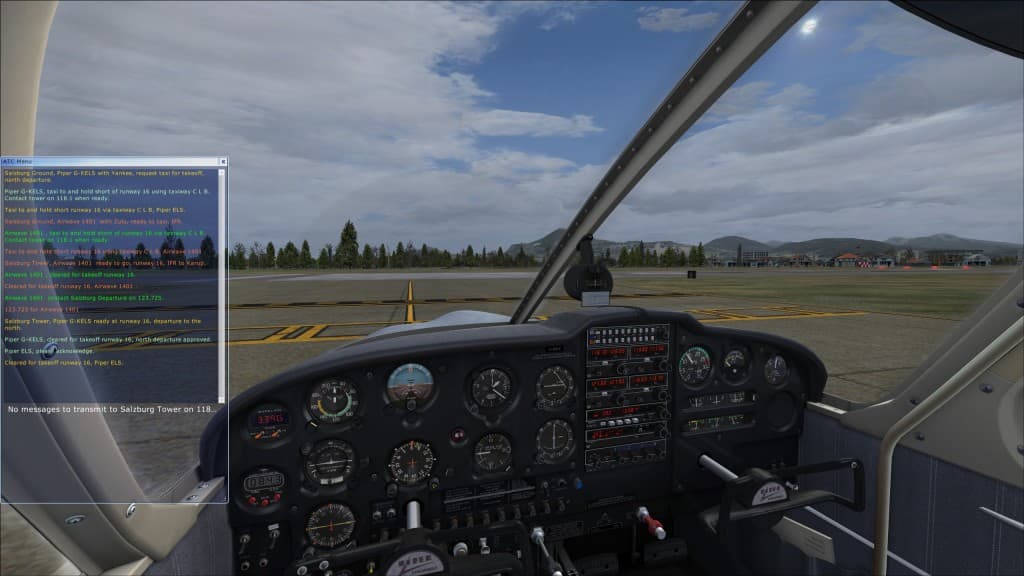 Magneto test, carburetor heater test. Despite the oil temperature on the lower end, I can’t believe how smoothly the engine runs. To the point where I’m starting to be suspicious. Too late though as we’re cleared for take-off.

Even after those few hundred hours in simulated GA aircraft and even if it’s not really for reals, take-offs give me goose bumps. The one, sole, only purpose of landing a plane is to take off again. I land for nothing else, ever.

A 180-degree left sees us climb towards the intended 5,000 feet. Few VFR aids are greater than the majestic Hohensalzburg Castle atop Festungsberg.

Because flying by GPS is for dimwits, we’re going to resort to the good ol’ analog stack to ensure we’re on course. The NDB should’ve and could’ve verified our U-turn from departing runway 16’s heading. It didn’t because, well, knobs. Next is the SBG VOR station, more specifically its 70-degree radial, which according to its DME, should have a Piper G-KELS flying it in a little under 6.3 nautical miles or 3 minutes. All instruments check out.

Finally. Peace. So much peace that I have overshot my intended cruise altitude and didn’t even notice.

You know what the Piper Cherokee is? It’s a 1960’s American Shangri-la. Like those ridiculous over-designed mile-wide cars that could accommodate a swimming pool. Those that I imagine people in Fallout‘s universe were driving before it all, you know, hit the fan. Cars were meant to be like that just as much as planes were meant to be flown to countryside picnics by happy (and very much utopian) middle-class families. It’s a product of the world, by the world, that never actually materialised. 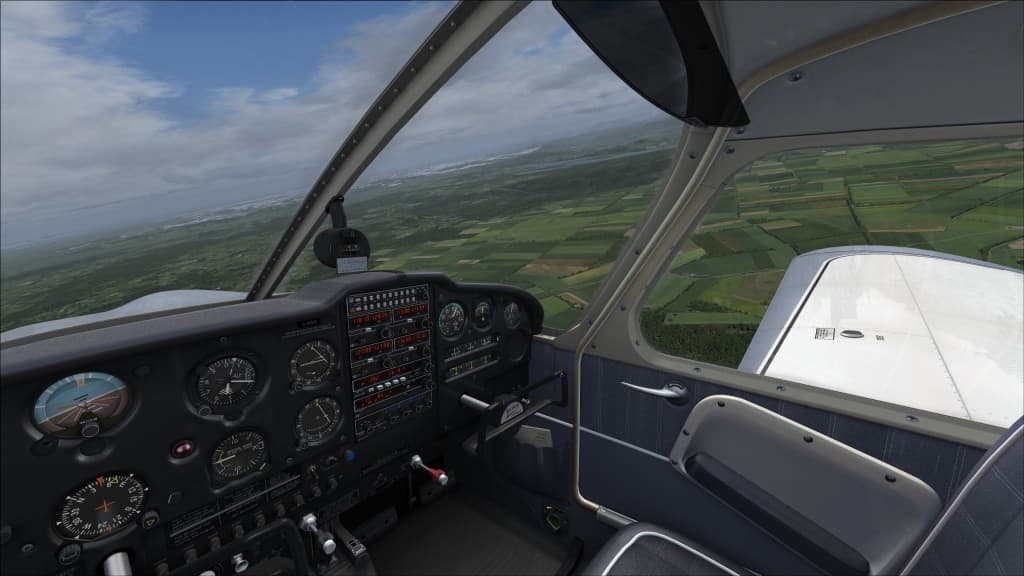 Another thing that never materialised is Yours Truly’s gray matter. I have again overshot the 70-degree radial off VOR and have to correct. Not that it really makes a difference in VFR. In my further defense, they don’t call immediate vicinity of a VOR station ‘zone of confusion’ for nothing.

The day gets bluer and brighter by the minute. The snow hasn’t yet managed to fully retreat to spend the summer among the magnificent peaks in the backdrop. It truly is lovely. Autopilot on. Heading lock, altitude hold.

Visual of Wels airfield at roughyl one o’clock. 20 degrees to the right puts us bang on the reciprocal of the LNZ VOR’s 270 radial. Or, in other words, 90-degree bearing. Yeah. I am a navigational genius. Responding to the unexpected? Not so much. Let’s check the ATIS.

The eagle-eyed may have noticed the heading bug setting. It’s 65 instead of 70 and should cause us to deviate to the right off course. And in a world without wind it surely would. Go figure it out, I’m too busy enjoying the scenery.

The bad news is, as per ATIS above, we’re going to have to turn around to hit runway 27. Good news is, well, everything else. And there’s ILS for that runway. I don’t intend to auto-land but having the CDI and glide slope needles visible while landing is never bad. Autopilot off, seatbelts on, announce intention to land.

I couldn’t be in a better position to join the approach pattern on right downwind, oh thank you almighty Linz tower!

Traffic. An airliner, a jet most probably, and they’re flying straight-in. There’s either going to be a massive crash or one of us will have to go around. Oh, I believe in you almighty Linz tower!

Base leg. Cleared to land. Flaps are 1/3rd down, mixture is full rich, traffic control is quiet, nails are being bitten. Surely…

… Surely indeed as the flying coach is ordered to go around and immediately change comms frequency to Linz approach. I’ll be honest here. I hate flying IFR!

Not even a thought of rather pestering nature of IFR which makes it just feel like a second job can wipe the smile off my face as I touch down and shortly afterwards, turn next taxiway. This is awesome. The simplicity of it, the honesty, the non-bendable rules by which only whole wide bloody world works. 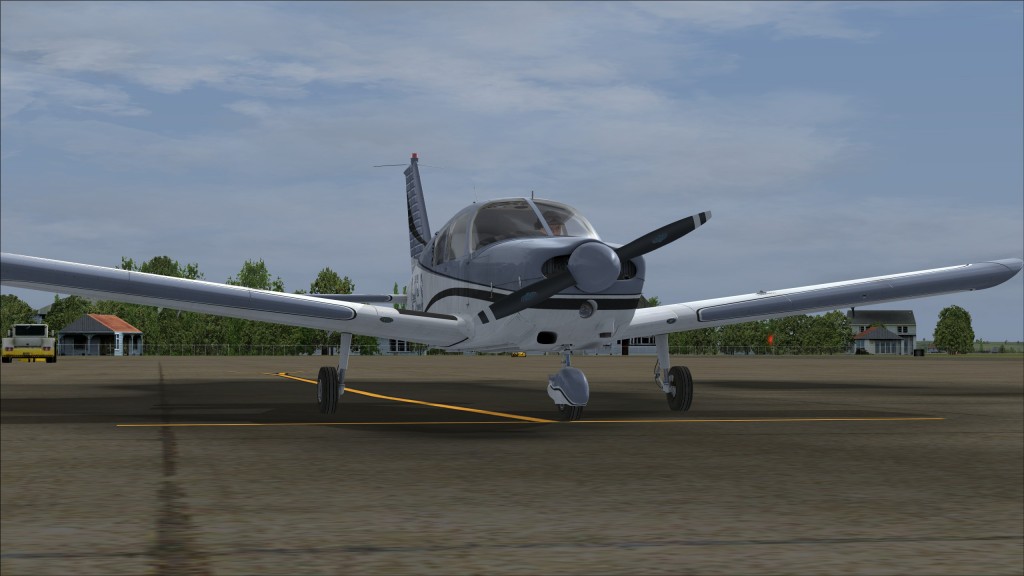 Looking at this beautiful dihedral Hershey bar on top of a shapely cabin that I’m sure would water an eye of even the likes of Bernoulli or Newton, I recall why do I ever land. Yeah. That’s right.

The WeekEndGame: Carnivorous Carnival In Watercolour